NOTE: The Brotman Baty Institute for Precision Medicine (BBI), in fulfilling its goal to create a community of investigators across its three founding institutions, awards grants each year to advance basic science and translational research related to precision medicine.

“Given the lack of major improvements in the clinical outcome of pancreatic ductal adenocarcinoma over the past five decades, innovative approaches are clearly called for to discover and develop novel therapeutic targets.”

Dr. Christopher Kemp, professor in the Human Biology and Public Health Sciences divisions at the Fred Hutchinson Center Research Center and a member of the Brotman Baty Institute for Precision Medicine.

It is expected that more than 60,000 people in the United States in 2021 will be diagnosed with pancreatic cancer and nearly 50,000 of them will die from the disease, according to the American Cancer Society. It is the third leading cause of cancer death in the United States. The current five-year survival rate is 8 percent.

Surgery provides the best hope for patients, with a 17 percent survival rate if the cancer is identified early. If not, regrettably, radiation and chemotherapy offer only short-term benefits because patients typically die within one year of diagnosis.

Dr. Christopher Kemp, a professor in the Human Biology and Public Health Sciences divisions at the Fred Hutchinson Center Research Center (the Hutch) and a member of the Brotman Baty Institute for Precision Medicine (BBI), is determined to lower those numbers of diagnoses and deaths – significantly – through functional precision medicine.

“Precision medicine in oncology has become synonymous with DNA sequencing of a patient’s tumor to inform treatment options,” said Kemp. “However, for most patients the information gained by sequencing of large panels of cancer genes is not yet linked to specific therapies or the process is too complex to inform therapeutic choices. This challenge is comparable with solving an equation with too many unknown variables. Adding functional data will help us to solve the equation.”

Kemp and his colleagues at the Hutch, Dr. Sita Kugel, Researcher Bryan Kynnap, and Research Biochemist Russell Moser, were awarded a BBI “catalytic collaboration grant” of $120,000 in 2018 to explore ways to reduce those unknown variables.

Through functional testing of thousands of candidate genes and hundreds of drugs, they identified four drugs – THZ1, SNS-032, THX531, and Triptolide – that showed promising activity against pancreatic cancer cells. Interestingly, these drugs all converge to inhibit the same genetic process, which triggers the cancer cells to kill themselves through programmed cell death.

Much work remains, and Kemp and other researchers at the Hutch will be collaborating with oncologists to initiate clinical trials to determine if a functional precision medicine approach can improve survival of patients with pancreatic cancer. They also are completing a manuscript articulating their findings for publication.

“We believe that this and other functional approaches will enhance the ability to match the right drug to the right patient and will contribute to a paradigm shift in addressing pancreatic cancer,” Kemp said. “It is likely that in 10 years, the number of available oncology drugs will be in the hundreds and the drug selection process used by oncologists will not be limited to a few standard-of-care chemotherapy regimens. Integration of empirical functional testing together with digital genomic information, computational tools, and artificial intelligence, will be needed to identify the best possible treatment for a given patient.”

Kemp also is committed to training the next generation of scientists to develop functional precision medicine approaches to identify more effective, less toxic therapies for cancer patients. These new methodologies of testing the function of thousands of genes and hundreds of drugs in a given patient’s cancer provide unprecedented insight into what pathways to target with which drugs. These methodologies, he said, will contribute to a new age in cancer medicine.

“The analogy would be a maritime explorer with a 14th Century map of the New World suddenly having access to Google Earth,” he said.

BBI funding enabled Kemp and other researchers at the Hutch to test their idea that these maps were accurate and that the drugs they identified could be effective in fighting one of the most pernicious forms of cancer.

BBI’s grants are helping create a community of investigators across the Institutions partners – UW Medicine, the Hutch, and Seattle Children’s – to advance basic science and translational research with clear relevance to precision medicine. Over the past three years, more than 50 projects totaling $5.6 million have been funded involving nearly 150 investigators.

“The work of Chris Kemp and his research team exemplifies the vision behind BBI’s grants,” said Dr. Shendure, BBI’s Scientific Director. “These funds represent a catalyst for short term investigative research, as well as an investment in long term collaborations toward advancing precision medicine.” 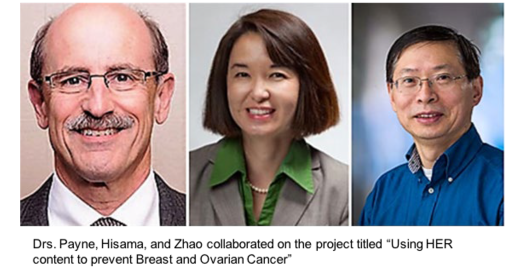 Members of the Brotman Baty Institute for Precision Medicine (BBI) are using electronic health records to identify women with a risk of having a genetic predisposition to breast cancer. 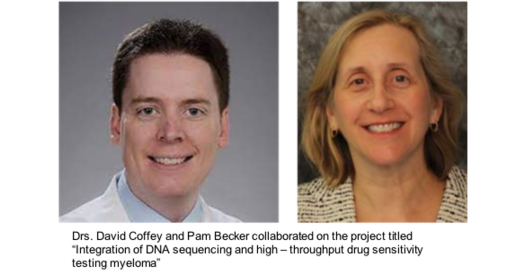 “Although recent advances have led to a surge in the number of therapies available to treat Multiple Myeloma, it remains a challenge to identify which treatment a patient is most likely to respond to.” Dr. David Coffey, Fred Hutchinson Cancer Research Center